April 22, 2021
Trending Now
Home Health The Hindu Explains | Is the recent spike in COVID-19 infections indicative of a ‘second wave’, and will it be as severe as the first one?
The story so far: Experts remain divided on the question of whether the slow yet steady rise in the number of COVID-19 cases in the country over the last week of February is indicative of the onset of a ‘second wave’. But the Centre and some State governments are on the alert against the rising numbers and are reinforcing aggressive testing and proper social and hygiene protocols. In several States, some restrictions have come back into play, though in a watered-down form.

What is happening around the globe?

Globally, nations in Europe that witnessed a spike in May 2020 have slowly started emerging out of the grip of COVID-19. As the number of cases dropped, countries also let their guard down, opened up the economy, and resumed travel and near-normal activity. In the summer of 2020, people started travelling across Europe, eager to be released from the confinement and stress of the lockdown.

Also read | Is India witnessing the beginning of the second wave?

In November, the second wave struck. Experts said every country in Europe that had managed to get away lightly with the first wave was nearly crippled by the second one. Even nations that had suffered badly initially, including Italy, were hit hard again. Hospitals started filling up, beds went scarce again, and the death rate started climbing. Stricter lockdowns were introduced, with curfews and restrictions on gatherings in public places; schools were shut down again, as governments struggled to cope with this new wave. In late 2020, the emergence of newer, mutated strains of the virus in Britain and South Africa meant a faster-spreading variant had established dominance in some countries. However, scientists said there was no evidence to show that the new British strain caused a more severe disease.

Are cases growing in India?

After infections peaked in September last year, cases across the country had been steadily declining, with the exception of Kerala, an outlier State that continued to see high numbers after having seen initial success in flattening the curve. However, in the last week of February this year, the trend reversed, with some States beginning to report higher numbers. While the overall rise was rather gradual, the average was skewed by high spikes in some districts in the States — particularly in Maharashtra and Punjab. The average increase was around 14,000 new infections per day and the upward trajectory began around the last week of February. Two States, Maharashtra and Punjab, led the increase in the number of cases, even as their testing numbers had dipped over the past few months.

The Union Health Ministry said on Saturday nearly 86% of the over 16,400 cases recorded in the previous 24 hours were from six States and one Union Territory. The Cabinet Secretary chaired a review meeting with eight States and UTs that have shown a surge in infections recently, namely Telangana, Maharashtra, Chhattisgarh, Madhya Pradesh, Gujarat, Punjab, West Bengal and the Union Territory of Jammu and Kashmir.

What is causing the spike?

“The spikes in Maharashtra were caused by a series of super-spreader events, or clusters,” said V. Ravi, nodal officer for Genomic Confirmation of SARS-CoV-2, government of Karnataka. He was speaking at a seminar organised recently by Neuberg Diagnostics on “Coronavirus — Variants and Vaccines”. The rise in the number of cases was not due to a variant of the virus with a tendency to transmit faster, but because of select super-spreader events, he said. 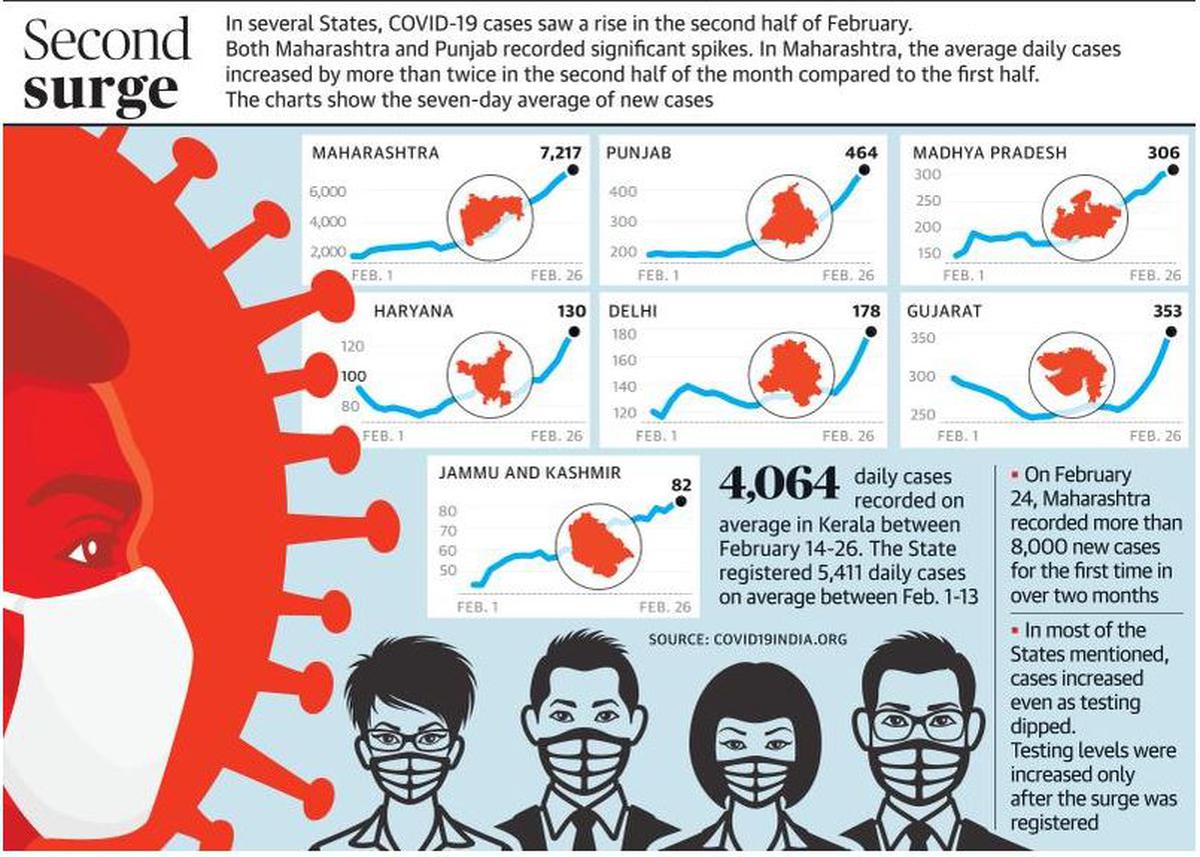 V. Ramasubramanian, infectious diseases specialist at Apollo Hospitals and part of the Tamil Nadu task force on COVID-19, says, “With common sense, and looking at a little bit of history globally, a second wave could be down the line for India. I don’t see any reason why India shouldn’t have a second wave. However, the severity this time round may be milder.”

In general, there seems to be an impression among people that the country is over the worst phase of the pandemic, and hence, many are letting their guard and masks down. During the previous surge, strict regulations imposed by States along with fines and penalties for violating protocols helped ensure compliance. However, with the seeming let-up in virus activity in terms of the number of positive cases being reported daily, safety measures were overlooked, possibly leading to the clusters that have pushed the numbers up again.

There are others who believe that a ‘second wave’ is not really a wave, but more of a blip. In an interview to The Hindu, Manindra Agrawal, deputy director at IIT Kanpur and a leading mathematician involved with the National ‘Super Model’ initiative, said India is unlikely to see a second wave. He said based on the model, the cases would “at most rise to 11.3 million or 11.5 million infections by April 2021 — or about 300,000-500,000 new confirmed infections over the next 10 weeks (approximately)”.

One reason for this, he said, could be the fact that 60% of India’s population had already been exposed to the virus and the country may have approached herd immunity. But the Indian Council of Medical Research (ICMR), according to the third national serological survey conducted from December 17, 2020 to January 8, 2021, had reported that around 21% of Indians were estimated to have been exposed to COVID-19.

Earlier, T. Jacob John, former Professor of Clinical Virology at the Christian Medical College, Vellore, had cited the consistently low number of cases in Tamil Nadu despite poor compliance and said that fewer people may be susceptible or vulnerable to catching the infection.

What is the way ahead?

“There are only two ways of getting immunity from the virus, one is getting infected, and the other is via a vaccine,” says Dr. Ravi. It is important to fast track the vaccine programme across the country, but testing is equally important. “Testing is the most powerful tool in our hands,” he says, and adds that contact tracing is key for disrupting the chain of transmission. The number of tests must go up again and contact tracing, ideally 20 persons for every case, should be taken up intently, he recommends. Experts call for a renewed emphasis on following safety protocols, such as wearing masks, washing hands and maintaining physical distance to fend off a possible ‘second wave’ or a sustained hike in the numbers. Draconian total lockdowns are no longer necessary, they add.

To review the ‘prevailing COVID-19 situation’ in the country, Prime Minister Narendra Modi on …