In India, based on all that we know, all vaccines currently available are safe and should be used in pregnant women

During pregnancy, the body undergoes many changes, particularly, those driven by hormonal levels and in immune system function that are intended to stop the mother’s body from rejecting the baby, but increase her vulnerability to viral infections. As with most SARS-CoV-2 infections in the general population, most infections in pregnant women are likely to be asymptomatic or mild, but, particularly during the third trimester, there may be severe complications, with some reports stating that there is a several-fold increase in pregnant women needing intensive care as compared to infected non-pregnant women. Infections in pregnant women have been linked to an increase in preterm births, low birth weight and foetal distress, with a higher mortality rate in mothers-to-be and their babies. Many of the complications are in pregnant women who also have other co-morbidities, such as overweight, diabetes, hypertension or cardiac and chronic respiratory diseases Further, detection of viral RNA in the placenta or in foetal membranes shows that while likely to be rare, it is possible that infection with SARS-CoV2 can be passed from mother to baby. Based on a series of studies, the US Centers for Disease Control and Prevention (CDC) listed pregnancy as one of the risk factors for severe disease in May 2021, and recently, the World Health Organization revised its recommendation for vaccination to include pregnant women in Category II to be prioritised for vaccination, along with other co-morbidities.

A key area of concern for pregnant women is safety. Pregnant women are generally excluded from vaccine trials as a precaution, but this creates a complication because without testing it is not feasible for regulators to make a recommendation for the use of a vaccine in this group. So trials for pregnant women, if they are done at all, tend to be done well after the accumulation of data from Developmental and Reproductive Toxicology (DART) studies on animals and from clinical efficacy and effectiveness studies. So far, the Pfizer, Moderna and Janssen vaccines in animals have not found any toxic effects or malformations, and studies for the Astra Zeneca vaccines. A few women (12 for Pfizer and 6 for Moderna) enrolled in the efficacy trials of the mRNA vaccines were found to be pregnant or became pregnant after enrolment, and no safety issues were identified, but the numbers are small. A recent analysis of the real world use of vaccines in pregnant women was published by the US CDC in the New England Journal of Medicine, reporting on almost 36,000 women given mRNA vaccines showed a small increase in pain at the injection site, but no other difference in side-effects. Over 1,10,000 pregnant women are enrolled in the CDC v-safe registry and data on safety will continue to accumulate. Some data shows that mothers can pass their antibodies to the baby through the placenta, but to verify whether the antibodies will protect the baby needs more data.

The data available so far is largely from mRNA vaccines, but for vaccines that have or could be used in pregnant women, the recommendations are clearly in favour of use of inactivated vaccines or non-live vaccines or their equivalent. An issue that has been raised with regard to mRNA and vectored vaccines is lack of data on whether the vaccine or vector persists in the body or is widely distributed beyond the vaccination site. Such studies are usually done for drugs which are expected to enter the systemic circulation and not always required for vaccines, except with new adjuvants or other new components are used. It appears unlikely given the rapid breakdown of mRNA and what is known about vectored vaccines, but this has not stopped anti-vaxxers from claiming that the lipid nanoparticles of mRNA vaccines bind to ovaries, even in the complete absence of such findings from DART studies. 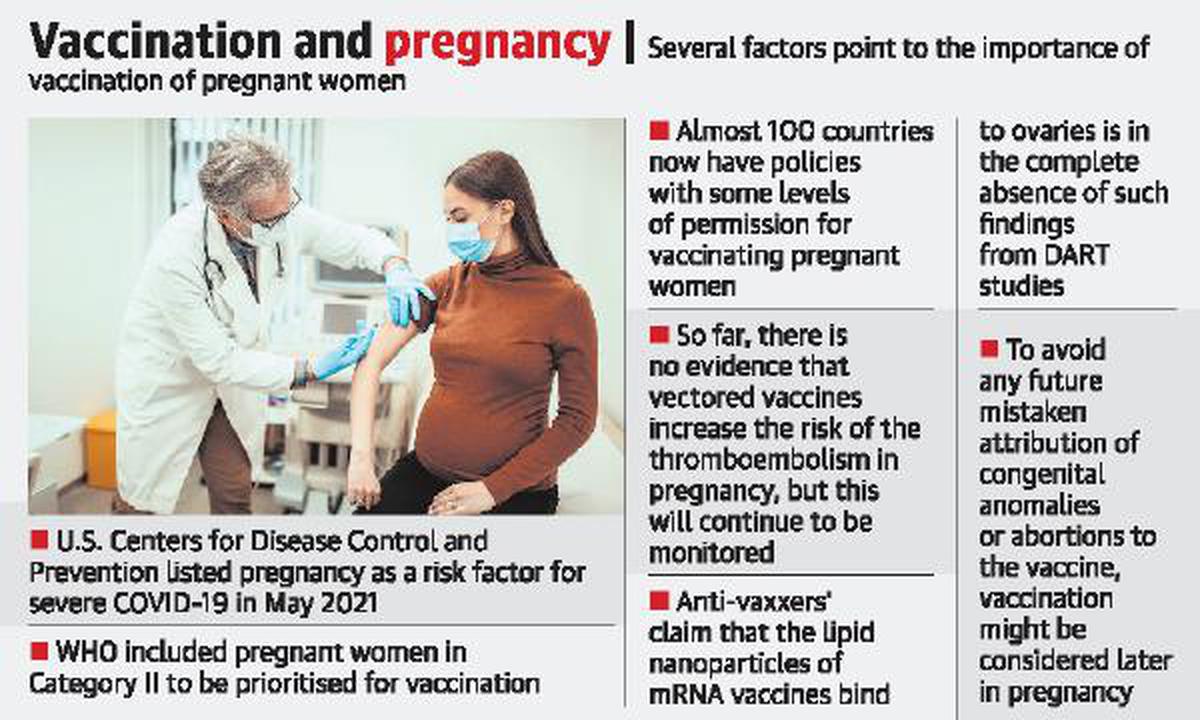 Since pregnancy increases the risk of venous thromboembolism four to five times for women, a frequently asked question is whether the adenovirus vectored vaccines like Covishield or the Janssen should be used, because they are associated with a small risk of thrombosis with thrombocytopaenia syndrome (TTS) in young people. It is important to understand that TTS occurs when the body has or makes antibodies to a platelet protein leading to clot formation, which is a different process for thromboembolism in pregnancy. So far, there is no evidence that vectored vaccines increase the risk of the thromboembolism in pregnancy, but this will continue to be monitored in countries that have widely used these vaccines in women of reproductive age. For India, based on all that we know, all vaccines currently available are safe and should be used in pregnant women to safeguard them and their babies. A pregnancy registry is an important part of the overall safety monitoring of vaccines for the first few years after they are used and must be encouraged, especially in India, where we have a large birth cohort, and thus an opportunity to contribute to the global literature on vaccine safety.

Finally, the timing of vaccination during pregnancy is frequently discussed. This is because of the general principle that most malformations and most pregnancy losses occur in the first trimester, so to avoid any future attribution of congenital anomalies or abortions to the vaccine, vaccination might be considered later in pregnancy. However, the recommendation that vaccination can be started at any time during pregnancy or in case the first dose has already been given, the second dose can be given when due without consideration of the trimester is logical to achieve early protection of pregnant women.

Vaccination of pregnant women is urgent and essential to protect them and their babies, and is a responsibility of the healthcare system. The Government of India should be commended for the recommendation, even as we ensure that monitoring of safety is enhanced through both passive and active surveillance in vulnerable subgroups. In future studies, the regulators and policymakers may wish to consider whether we could enrol pregnant women at an earlier stage, so that recommendation for them could be made along with the general population.

Mumbaikars will travel by trains from August 2: BJP | Mumbai News – Times of India

Adults must keep a watch on children’s behaviour during pandemic, says expert